Oregano, originally from Greece, turmeric from India, and ginkgo biloba from China, are powerful herbal remedies used to treat everything from allergies to cancer.

Oregano is packed full of antioxidants -- many more than can be found in fruits or other vegetables. This common kitchen herb is a huge help in herbal medicine because it builds immunity, fights the effects of aging, and protects the body from diseases.

Ginkgo biloba is another herbal powerhouse. Regular use of ginkgo biloba helps protect against blood clots and nerve damage. Ginkgo biloba leaves are used to relax the blood vessels, to stimulate the circulatory system, to increase blood flow to the brain, and to improve eye problems. 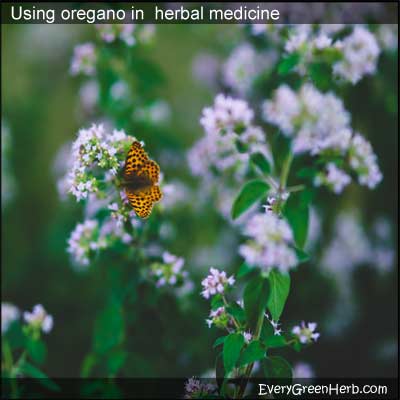 Oregano is easy to grow at home and has many uses -- in the kitchen and in herbal medicine.

Oregano has antioxidants that fights sickness and disease.

Because oregano is so powerful, use of this plant in therapeutic doses and the use of oregano essential oil should be limited to a couple of weeks. Also do not use oregano if you are allergic to daisies, mint, or basil. Two much oregano can cause swelling of the lips, itching, and even miscarriage. It can also prevent the body from absorbing iron so should not be taken in large doses if pregnant. A little on your pizza will not hurt so don't worry about eating the small amounts in food.

Oregano is a familiar herb that is used in spaghetti sauce and other favorite recipes. Not only is oregano a tasty addition to Italian recipes, it is also a powerful disease fighter. Researchers with the U.S. Department of Agriculture have found that fresh oregano has more antioxidants than fruits and vegetables with 42 times more antioxidant power than apples. It has more active antioxidants than pure vitamin E!

What exactly is an antioxidant?

Antioxidants are chemical substances that help protect the body against cell damage from “free radicals”. Well known antioxidants include vitamin A, vitamin C, and vitamin E. Antioxidants work with the immune system to fight everything from disease to wrinkles.

Free radicals damage the body but oregano can help.

What are “free radicals”? Any molecule that contains an unpaired electron is a free radical. Free radicals are unstable and will extract electrons from other biological molecules, which generates more free radicals. Free radicals are produced in many different ways including normal metabolic processes, exposure to ultraviolet radiation from the sun, nuclear radiation, air pollution, and from the breakdown in the body of rancid (spoiled) fats. Free radicals have been implicated in aging, cancer, cardiovascular disease, and other kinds of damage to the body. Antioxidants fight free radicals and we need to get them into our diets on a daily basis. Add oregano to your soups, salads, and stews for strong immunity!

Comparing free radicals in the body to rusty metal

The whole process may be compared to a rusty old car. When oxygen and moisture work together to attack metal, rust is an obvious result. Once it starts, a little rust leads to more rust. It takes a lot of manpower with a steel brush to remove it. Free radicals are like rust – they work to destroy healthy cells and tissue. Antioxidants are like little power-houses working around the clock to gather up and remove harmful free radicals from the body.

Oregano not only works to destroy free radicals, it is also very useful in the treatment of bronchitis and other lung infections. For best results, brew tea from fresh oregano and breathe the steam deep into your lungs as you sip. Oregano is also good for treating infected sores, colds, flu, sore throat, sinus problems, indigestion, and stomach cramps.

In the following video, Sally Moran shows us how she takes oregano oil in capsule form:

Oregano is easy to grow.

Oregano likes full sun and well drained soil. Plants are easily started from seed, stem cuttings, or root division and grow from eight to twenty-four inches tall. Oregano can also be grown in pots. If plants start to look ragged, trim severely, add a little topsoil, fertilize, and water well. New growth should appear in a week or so. Harvest leaves when flowers begin to bloom. Prune established plants early in the growing season for lush, bushy growth. Use trimmings in tea or a favorite marinara sauce.

Tips for using turmeric in herbal medicine and home remedies 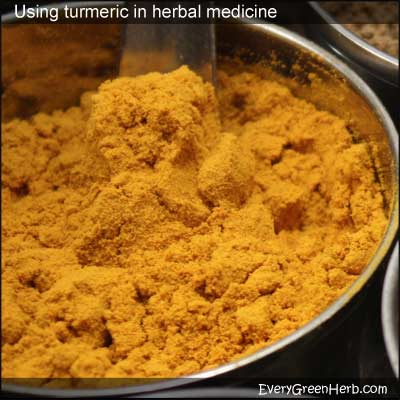 Turmeric is a strong antioxidant often used in herbal medicine to heal tumors.

Turmeric protects against many diseases if taken regularly.

Turmeric helps protect the liver from toxic compounds and increases the secretion of bile. It can help the body maintain a correct weight and is often used in weight loss programs. Turmeric is known to reduce blood platelet clumping (blood clots) and improve circulation. Many people believe it protects against many types of cancer and heart disease.

Turmeric dissolves in oil and is a powerful antioxidant.

When used to fight the growth of tumors, studies show a decrease in size and number of tumors. Turmeric also reduces histamine levels and increases production of natural cortisone by the adrenal glands.

Turmeric is a natural antioxidant that is often used in herbal medicine.

Laboratory studies have found that turmeric inhibits the development of cataracts, breast cancer, colon cancer, and lymphoma. Turmeric helps detoxify the body, and protects the liver from the damaging effects of alcohol, toxic chemicals, and prescription drugs.

Turmeric is an excellent addition to the diet.

It is known to guard the stomach by killing salmonella bacteria and protozoa that can cause diarrhea. Add to meatloaf, taco fillings, stews, vegetables, rice dishes, salad dressings, and chicken soup.

Turmeric may be purchased at any grocery store.

Add a few drops of olive oil to a teaspoon of turmeric and mix well. Apply a thin layer of the resulting paste to troublesome skin growths and rough, blotchy patches. The turmeric will dye the skin a deep yellowish orange – this is normal in any application of turmeric including poultices, ointments, and compresses. Skin conditions should show sign of improvement within a week or two.

Most turmeric comes from India and is the key ingredient in many curries.

Turmeric is also a main ingredient in many American mustards. The rhizome is dried and ground into fine powder for use in cooking and herbal medicine.

Many cultures use turmeric in rituals and herbal medicine.

Turmeric is related to cardamom and ginger and can be grown as an annual. The plants prefer raised beds with rich, sandy loam. The turmeric plant is fairly large, reaching 4 feet in height and has a growth habit similar to cannas. See photos of the turmeric plant at Wikipedia.

Ingredients in ginkgo biloba are known to inhibit blood platelet stickiness. This helps guard against strokes. Use of ginkgo biloba is thought to protect cells when they are not receiving enough oxygen. This property can help stroke victims experience less damage and recover more quickly. 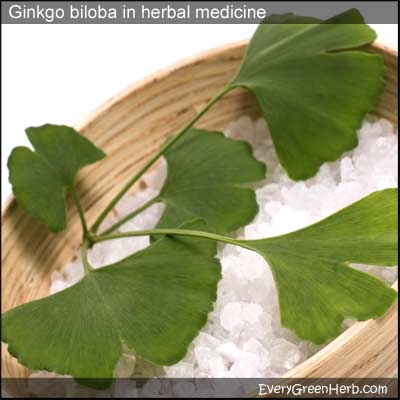 Ginkgo biloba helps the nerves, the brain, the circulatory system, the eyes, and more.

Ginkgo biloba has anti-aging properties, sharpens the memory, boosts concentration, reduces anxiety, lowers blood pressure, relieves headaches, improves circulation, and may help prevent or delay the onset of Alzheimer’s disease. Ginkgo biloba can help stop ringing of the ears and can help improve vision. It goes deep into the body to protect and heal.

Ginkgo biloba -- for the brain

In the following video, Dr. Terry Willard Ph.D. and Yarrow Willard teach us about ginkgo biloba:

Ginkgo biloba seeds are astringent, antifungal, and antibacterial. The seeds are used in the treatment of asthma, coughs, incontinence, and excessive urination. They are very nutritious and considered a delicacy in China.

Ginkgo biloba has a long history.

Medical use of ginkgo biloba goes back five thousand years when Chinese herbalists used it for memory loss and respiratory ailments. Today, tests show that ginkgo biloba may actually cause damaged nerve cells to regenerate!

Ginkgo biloba is also known as the maidenhair tree.

Ginkgo biloba trees can live over three thousand years and are one of the oldest living species of trees on earth. These trees are not pines or ferns and occupy a unique position in the plant kingdom. The ginkgo biloba tree is the sole living link between the lower and higher plants, between ferns and conifers.

Ginkgo biloba trees can easily be grown in North Georgia.

Ginkgo biloba trees, native to China, grow well in the North Georgia area, even in city atmospheres where pollution would kill other trees. Young trees should be staked because they tend to grow crooked. Ginkgo biloba trees start off growing slowly but after a few years the rate of growth increases. After a female tree reaches about 30 years old, yellow plum like fruits are produced when pollinated. Male pollen is usually carried by the wind.

* Avoid ginkgo biloba when taking aspirin, anti-inflammatory medications, or blood thinners. When taking ginkgo biloba, do not exceed the recommended dose as a little goes a long way. Use of ginkgo biloba may cause mild headaches, rashes, or upset stomachs. Discontinue use if any symptoms persist. Discontinue use of ginkgo biloba a month before any surgery or dental work is performed. Turmeric warnings and contradictions -- when cooking with turmeric wear an apron! Turmeric stains are almost impossible to remove. Turmeric should be avoided in cases of gallstones, bile duct obstruction, high stomach acid, or stomach ulcers. Do not use large amounts of turmeric when taking blood thinners. Doctors advise against taking turmeric if you are taking blood pressure medicine or other heart medicines since turmeric can inhibit absorption of other medicines. Oregano should not be taken in large doses for an extended period of time. Use only for a couple of weeks at a time then take a rest. To decrease free radical production in your body, never consume any off-smelling cooking oil or rancid nuts. Fats go bad when exposed to air, heat and light so keep all cooking, bath, body, and massage oils tightly covered, in a dark, cool place. Never consume rancid fats and oils or use them on your body. Once a bottle of oil is opened, use quickly (consider buying smaller sizes). Always consult with a healthcare professional before using any herbal remedy especially if pregnant, nursing, or taking other medicines.

"The best way to really learn about herbal medicine is to touch and smell different herbs, taste them, use them daily, and grow them if possible. Herbal medicine is a way of life. It is not a quick fix." Janice Boling -- herbalist, web designer, artist, and writer

I love to hear from my readers and my customers. The best way to reach me is by email at hometown30512@yahoo.com -- I answer emails several times daily.

* Note - the information on this website has not been evaluated by the Food and Drug Administration.

** Most of the articles in this online herbal encyclopedia were first published by the North Georgia News in a weekly column titled Every Green Herb (by Janice Boling).